Water Powered Toilet Brush...
Hydro Brush™ was launched in the UK in 2007 and has proved to be a great Logicor success. Hydro Brush™ is aimed to be a mass market product with universal appeal on the international market without the need for alteration.

Hydro Brush™ has been independent tested to check our statement that its use, instead of the standard toilet brush, will provide significant savings on water use. The result was that Hydro Brush™ will produce the same cleaning results as a standard toilet brush in 10-15 seconds and require only 0.75 to 1.00 litre of water resulting in a saving of between 3 - 12 litres (0.7 - 2.6 gallons) of water per use. 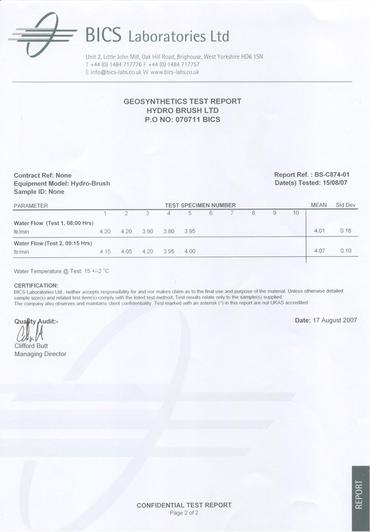 Hydro Brush Water Saving Certification
About 30% of the total water used in a household is flushed down the toilet. Old styled single flush toilets can use up to 13 liters of water in one flush with newer, more water-efficient dual-flush toilets using only six liters for a full flush and four liters with a reduced flush.
Source: www.waterwise.org.uk

Toilets in UK homes use an estimated two billion liters of fresh water every day. Over seven million of those toilets use 13 liters of water, and approximately five million are the latest low-flushmodels. Source: waterwise.org.uk
Using a traditional toilet brush may account for water wastage in many homes as the need for the brush is not seen until after the first flush of the toilet. A second flush (4-13 litres) is then required after scrubbing the pan to replenish the water and clean the brush. A further flush may be required if the brush is still unclean.

Considering the average household flushes 5,000 times per year (Source: waterwise.org.uk), savings of between 1,500 and 6,000 litres per year could be achieved per toilet, per household just by simply installing a Hydro Brush. These calculations are based on using the Hydro Brush instead of a conventional toilet brush on 10% of the average toilet flushes.